In today’s society, we are bombarded with advertising on a daily basis, seeing thousands, if not millions of advertisements. It is a cluttered market place; there is no doubt about that. Companies want to get through that clutter and noise so their target market can understand their message which will hopefully persuade or influence them to contact the company, visit the store, and ultimately buy the product. A few companies are now going with controversial ads to stand out from the crowd and also with the aim that the ad might go viral so more people hear their message. With social media the current trend, people tend to voice their complaints – whether on bad service or a bad ad – via this medium faster than ever before and companies then have possible collateral damage that can affect the company and the brand for a long time. There is that old saying that ‘all publicity is good publicity’, however when companies and/or brands step over the line, it can actually cause product boycotts, negative public reaction and a decrease in sales.

Controversial advertising can be related to the potentially offensive or controversial product (ie tobacco or alcohol products) while others relate to the controversial images, words or situations that are taboo subjects or that violate societal norms or values. Some controversial ad strategies can work, there is no question on that, they can cut through the clutter and get wide-spread exposure for a brand but it is the ads that are just plain offensive that makes me wonder where these advertisers have come from and what was their strategy in the first place?

JWT India created a series of disturbing ads for the Ford Figo in 2013, although never officially launched or approved as Ford has stated but they were showcased online on the website ‘Ads of the World’. The main controversy was the ad depicting the former Italian Prime Minister Silvio Berusconi giving a peace sign with three women tied up and gagged in the trunk with the tag line ‘Leave your worries behind with Figo’s extra-large boot”, with another ad depicting Paris Hilton winking with the three Kardashian sisters bound and gagged in the boot.

The message is clear that the boot is roomy that is can even fit three women and yes I can see the humour in these caricatures, however these ads came from a country that is sensitive with the recent gang rape situation. Certainly not a good time to release such a campaign and shows a complete disregard of the gang rape controversy.

I believe three executives have been fired regarding this campaign but it is not officially confirmed.

The conservation charity WWF and ad agency DDB Brasil released a campaign called ‘Tsunami’ where images of dozens of planes about to crash into New York City were used to illustrate the scale of lives lost in the 2004 Asian Tsunami. This campaign is a complete disregard of both disasters.

In a joint statement from WWF Brasil and DDB Brasil, they admitted that the press ad was “created and approved” for use.

“It was created and approved in late 2008, mistakenly, and was solely the result of lack of experience on the part of a few professionals from both parties involved,” the joint statement said.

“In no way was it done in bad faith or with disrespect to American suffering. WWF Brazil and DDB Brasil acknowledge that such an ad should never have been made, approved or published.”

Barcardi Breezer released an ad campaign in 2008 and it went viral, with Barcardi in USA saying it was only released in Israel lasting two months. The message to the target market of young females is if you want to look better than you need an ugly girl friend and a Barcardi Breezer. Talk about a campaign that doesn’t know its target market resulting in a large number vowing to boycott the brand.

Benetton is a company known for its controversial advertising, concentrating on social issues such as racism, sexism and gender issues. But those campaigns although controversial related to the tagline ‘united colours of Benetton’. The ‘sentenced to death’ campaign in 2001 which aimed to give a face to the issue of capital punishment showed a total disrespect to the victims of those on death row as well as providing a political statement that had nothing to do with Benetton or what the company was about. This campaign resulted in the company publically apologising, making a substantial charitable donation to the Missouri Crime Victims Compensation Fund and the Advertising Director Oliviero Toscani leaving the company after sales decreased substantially. Benetton have since refocused their advertising, they are still controversial but realised what line they should not cross. 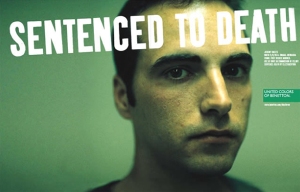 Not all controversial advertising is good and yes it comes down to a moral and ethical issue, but advertisers and company executives should know what lines to cross and what not to, and they need to be aware of what is sensitive in the market place. But most importantly they should know their target market! The ads above, and there are a lot more, show that there are advertisers and executives who do not understand their market, have no consumer insight and are just hiding the heads in the sand on society issues. Wake up, you have a duty to be more understanding of these issues, yes you can create controversy but there are just some issues you should avoid, jumping over a line just for controversy sake is not enough. Being creative just to be creative is not an excuse! Yes those brands get exposure but it’s the product boycotting and negative public opinions that should worry companies, sometimes companies just won’t be able to regain a positive public opinion.

One thought on “Not all controversial advertising is good publicity.”